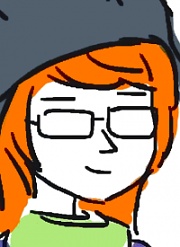 Maria Boyle is a freelance illustrator based in Dublin. Maria is best known as the creator of the “Twisteddoodles” web comic. Her work covers a range of subjects from parenting to science, Irish culture to popular culture. She has an international following and her comics have been translated into different languages. Her work has appeared in a number of places, TV3, RTE, 98fm, 104 fm, Newstalk, The Guardian, Image Magazine, as well as popular science websites I F*CKING LOVE SCIENCE an ASAP Science.