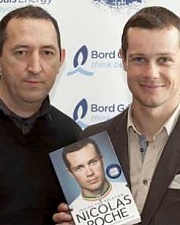 NICOLAS ROCHE
Son of the 1987 Tour De France winner Stephen Roche and godson of former world number one Sean Kelly, it is no surprise that Nicolas Roche is Ireland’s best known professional cyclist.

In five seasons as a professional, 27-year-old Nicolas has risen through the
ranks of the peloton to become team leader at French professional squad Ag2r La Mondiale.

Nicolas won the Irish national road race championships in 2009 and wore the
shamrock jersey of Irish champion on his debut at the Tour de France a week
later, where he took five top 10 stage placings, including second on stage
14. He recently took his biggest ever victory, a stage win at the five day WorldTour race the Tour of Beijing.

His Tour De France and Vuelta Espana (Tour of Spain) diaries
have been the most popular features in the Irish Independent over the past
two years, receiving rave reviews even from rival newspapers. His honesty and passion for the sport have seen his diaries hit the headlines worldwide on numerous occasions and have introduced a whole new generation, curiously many of them female, and many
more of them with no prior interest in cycling, or indeed sport, to the
wheeling and dealing of the professional peloton.

His biography, ‘Inside The Peloton – My Life As A Professional Cyclist’ was published in September and has been shortlisted for the Bord Gais Energy Irish Book Awards in the Sports Book of the Year category.