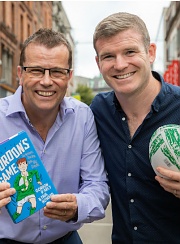 Gordon D’Arcy is a former Leinster, Ireland and Lions rugby player. He received his first cap in 1999 and played inside centre for most of his career. He was part of teams that won three European Cups, two Six Nations Championships, and the historic Grand Slam of 2009. He retired from rugby in 2015.

Paul Howard is an author, journalist and comedy writer best known as the creator of the Ross O’Carroll-Kelly series. He has won a record four Irish Book Awards and is a former Irish Sports Journalist of Year and Irish Newspaper Columnist of the Year.