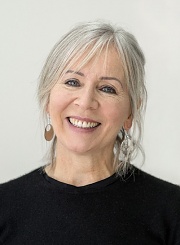 A teacher by training, Gillian began writing when her daughters were young, sitting with a notebook at the top of the stairs waiting for them to go to sleep. Her first children’s book, Adam’s Starling , won the Eilís Dillon Memorial Award in 2002 and was described by the Irish Times as: ‘an impressive debut – genuinely moving.’ It was followed by the publication of her Conor stories in the O’Brien Press Panda series. These have proved hugely popular and she often visits schools, libraries and book festivals where she brings the stories to life with dance and drama activities.

In recent years Gillian has begun writing for adults and is thrilled that her first crime fiction novel will be published by Penguin (Sandycove) in 2022.

She lives in Dublin where she now writes at a desk, doing her best to concentrate while her little dog Kevin barks at every passer-by.