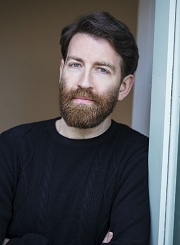 He has written and presented Colm O’Regan Wants a Word which has won two National Radio Awards and a Celtic Media Award. He has also written for TV (Des Bishop’s This is Ireland, Neil Delamere’s The Only Viking In The Village), sketches for Irish Pictorial Weekly, Republic of Telly and The Claire Byrne Show.
He writes a radio column for RTE Radio Drivetime during the Summer since 2015 and one for BBC World Service In The Balance since 2011 as well as a weekly column for the Irish Examiner since 2013.

Colm’s first novel Ann Devine: Waiting for her closeup ( Transworld Books) is published in February 2019. It tells the story of what happens when the Tidy Towns meets the Game of Thrones.