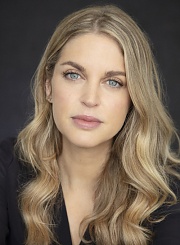 Dublin born Amy Huberman made her first appearance on television in RTE’s On Home Ground. She went on to appear as Bella in the Showbands directed by Ian Fitzgibbon for Parallel Films/RTE, Dream Team 80’s (ITV), Camera Cafe (RTE) and George Gently (BBC). On Irish television Amy is perhaps best known as the much loved character Daisy O’Callaghan who appeared in all seven seasons of The Clinic produced by Parallel Films for RTE and for which she was nominated as Best Supporting Actress at the Irish Television Awards in 2008, 2009 and 2010.
Other television credits include comedy sketch show Your Bad Self directed by John Butler for Treasure Films/RTE, Channel 4’s Comedy Lab, two series of Comedy Central (UK)‘s comedy drama Threesome which attracted rave reviews and record viewing figures and for which she was nominated for a Glamour Award (2012) for Best Comedy Actress, Animal Practice for NBCand, most recently, Heading Out for BBC.
On film Amy has appeared in independent Irish features Satellites and Meteorites directed by Rick Larkin for iWire Films (for which she won the Jury Award at the Ft.Lauderdale Film Festival), A Film With Me In It opposite Dylan Moran and Mark Doherty and directed by Ian Fitzgibbon for Parallel Films, Rewind directed by P.J.Dillon for which she won the IFTA for Best Lead Actress Film in 2011, Three Wise Women produced by Parallel Films for Hallmark Channel (US), Chasing Leprechauns also for Hallmark Channel/Parallel Films and Stella Days opposite Martin Sheen, produced by Newgrange Pictures and directed by Thaddeus O’Sullivan and for which she was nominated for a Best Supporting Actress (Film) Award in the 2012 IFTA’s. Her most recent film role was Ruth in The Stag for Treasure Entertainment.

Amy is also a very talented author and has written two number one bestselling novels, Hello Heartbreak( 2009) and I Wished for You,(2012) both published by Penguin Ireland. Hello Heartbreak was nominated for two Irish Book Awards in 2010, Best Irish Newcomer of the Year and Eason’s Irish Popular Fiction of the Year Award.

‘Agonizingly funny – a refreshing and honest take on the true priorities of a a modern woman.’ Dawn O’Porter on I Wished for You.