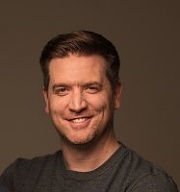 Dave is one half of the award-winning and hugely popular radio duo, Dermot & Dave, who you’ll hear every weekday on TodayFM. Having never set foot in a radio studio before, Dave’s first job was the high-profile Breakfast show on 98FM. After 12 years of huge success, the show has since made the big move to the natonal airwaves, to lunchtimes on Today FM, and now sits in the highly-coveted 9am-12pm slot. Here, the show reaches a huge audience in Ireland every day. With every radio award possible, double-platinum comedy albums, World Records, a number one hit for Euro 2016 and a sold-out comedy tour, Dave’s radio career has been a stellar a success.

Dave is an accomplished songwriter and music producer, whose list of credits include Des Bishop, Podge & Rodge and many commercials, films and TV shows.

No stranger to the world of podcasting, Dave has appeared on many and co-hosts Ireland’s premium motoring podcast, The Engine Room. In addition, as an ambassador with Volkswagen Ireland, Dave is greatly involved in the motoring industry in Ireland.