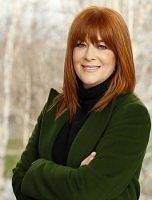 Bláthnaid Ní Chofaigh has been a staple of Irish television since she was eighteen, beginning her broadcasting career in Irish language programming.

Bláthnaid has since worked across television genres such as Current Affairs, Young People’s Television, Factual and Entertainment.

Her talent as an interviewer and passion for driving stories is focused on her goal of recognizing oppression and sharing stories. Bláthnaid’s proudest work thus far has been a documentary on FGM, her ‘Moment of Truth’ interviews especially the sensitive issues relating to adoption and abortion.

Bláthnaid joined the Nationwide team in 2020 and is loving travelling around the country, three night a week Nationwide is part of the Irish landscape.

Alongside her work for television, Bláthnaid has completed her first season on Bláthanid Libh for Raidió na Gaeltahcta and was awarded the ‘Gradaim Cumarsáide an Oireachtais ‘ for programme of the year. Bláthnaid’s acting talent can be seen in the TV series Crisis Eile with Wildfire productions for TG4.

Bláthnaid is married to Ciarán Byrne Sound Designer/Engineer/Producer, they live in Dublin with their four children. Born in Canada and brought up in the Gaeltacht in Meath she still holds a strong link with her native Meath and her ancestral home of Connemara.