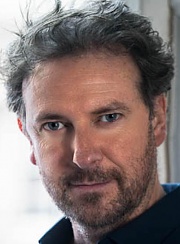 Whether on stage or screen, Risteárd is one of the busiest and most versatile performers working in Ireland and the UK.

He starred in Delicious in the U.K. with Dawn French and Emilia Fox on Sky 1, and co-wrote and starred in Après Match of the Day for RTE television.

A highly acclaimed actor, comedian and singer, he is also a uniquely gifted mimic, writer and hugely entertaining MC and after-dinner speaker.

Risteárd has vast experience in hosting and speaking at corporate, conference and sports events, consistently delivering topical, relevant, funny and intelligent material for a growing number of clients.

Recently he appeared in Channel 4’s hit comedy-drama No Offence, ITV’s The Suspicions of Mr Whicher and will soon be seen in a new 6-part thriller Acceptable Risk for RTE.

In theatre he has performed lead roles in all the major theatres in Ireland, most recently starring at the Gate in the musical ‘Jacques Brel is Alive & Well & Living in Paris’ also ‘The Weir’ (West End), Juno & the Paycock (National Theatre, London) Pygmalion at the Abbey Theatre among many others.

He is also a contributor to the Irish Times newspaper.