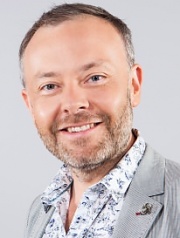 In 2012 he won Celebrity Mastermind, presented his first RTE TV series “Science And Me” in 2016 and has previously been a columnist with the Irish Independent.

For over 15 years he has hosted annual corporate awards ceremonies including the Web Awards, Social Media Awards, EIA Awards, Fit Out Awards and Student Enterprise Awards as well as festivals as diverse as the Festival Of Curiosity, Alltech Craft Beer Festival, Pint Of Science Festival and the business conference Measurement.ie.

He’s been the National Patron of Epilepsy Ireland since 2006 both fundraising for the organisation and raising awareness of the condition on radio, TV, in print and speaking at international conferences.

Rick is available for MCing launches, award ceremonies, panels and other corporate events.