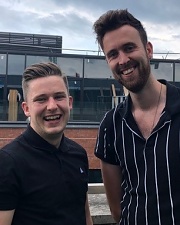 Graham and Nathan have been presenting the breakfast show on Spin 1038 for the last two years. At 28 years of age, they have been working at the station for six years- quickly moving up the ranks from a Sunday evening show to the biggest slot considered in the schedule. Their show won gold at the 2019 IMRO Radio Awards and two silvers at the same awards in 2018.

Graham and Nathan have also had successful brand partnerships while working on Spin 1038. They have engaged in creative multi-platform campaigns with the likes of Harvey Norman, Maltesers and Red Bull.
Both met in DIT while studying a 4 year BA in Film and Broadcasting. Their years of friendship and undeniable ‘on air’ chemistry have led to comparisons to ‘Ant and Dec’.

Graham and Nathan have created numerous parody and sketch videos that have amassed over half a million views across various platforms.
Both men are no strangers to TV- contributing regularly on ‘Elaine’ (Virgin Media one). They’ve also hosted nights interviewing the cast of RTE’s show ‘Love/Hate’ and spent an evening with BBC Radio Presenter Annie Mac.

So far in their short careers they have interviewed the likes of Ed Sheeran, Niall Horan, Macklemore and Gavin James.

Graham and Nathan are available for brand partnerships, as well as MCing launches, award ceremonies, panels and other corporate events.