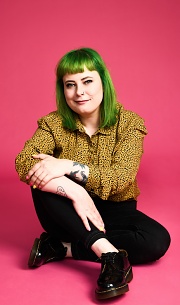 Aoife Dooley is a freelance illustrator, graphic designer, author and comedian from Dublin.

Aoife is best known for her Your One Nikita ( formally known as Dublin Hun ) Illustrations which chronicle the life of a 22 year old woman called Nikita, best friend Tanya and boyfriend Anto. She published her first book How to be massive October 2016 and her second in 2017 ‘How to deal with poxes on a daily basis’ with Gill books. In 2018 she released the Your One Nikita animated tv series on the RTE Player with season 2 following in 2020.

She also speaks openly about mental health and her struggles over the years with the loss of her mother and soon after biological father and how she copes. She was shortlisted in two categories for U magazines 30 under 30 awards 2018, for social contribution and activism.

“Razor-sharp observational humour … has the zeitgeisty quotability of a contemporary Roddy Doyle.” THE IRISH TIMES

“How to Be Massive is funny, affectionate and very, very sharp. Almost social history and always great fun, this book is, well, massive.” RODDY DOYLE