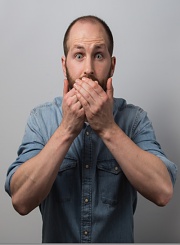 As heard on The Moth Podcast, NPR, BBC Radio 4 and ABC Australia

Cavan man Aidan Greene is undoubtedly Ireland’s foremost stammering comedian. Since starting comedy in 2010 he’s become a regular in comedy clubs across Ireland. Along with this he has played at major festival including the Vodafone Comedy Festival, Longitude, Indiependance and the Edinburgh Fringe.

Aidan has three consecutive sold out runs at the Edinburgh Fringe Festival with his comedy shows about stammering and falling in love and has performed to acclaim in Dublin, Albuquerque, Montreal and most importantly, Cavan.

As well as a comedian Aidan is also an accomplished storyteller. In 2016 he was runner up in the Moth Grandslam in Dublin. His story The Early Days of Stammer was featured on the Moth Radio Hour and broadcast on over 400 radio stations globally, to a listenership of over 30 million. In October 2017, he was invited to speak at National Stammering Awareness Day. He has also appeared on multiple podcasts including the BBC Ouch podcast.

“Aidan Greene clearly has a talent for comedy, and harnessing his gift has given him an authentic edge” **** Deadline News