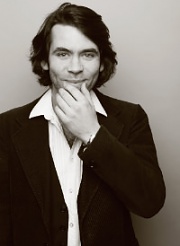 John is a comedian, actor, writer and voiceover artist.

As a comedian his television credits include The Liffey Laugh (RTE), One Night Stand (BBC), Stand and Deliver (RTE), Republic of Telly (RTE), Podge and Rodge (RTE), The Apprentice: Your Fired (TV3) and The Craig Doyle Show (RTE ONE). He also co-starred with Tommy Tiernan in the Third Policeman’s Ball, a tribute to Flann O’Brien.

He has performed at the prestigious invite only Montreal Just for Laughs Comedy Festival, while being a regular at the Kilkenny Cat Laughs and Iveagh Gardens Comedy Carnival. He made his debut at the Edinburgh Fringe Festival in 2011 with his first solo show Social Networking. In 2012 and 2013 he was invited to join Tom Stade as a special guest on his nationwide UK tours playing to packed houses across the UK.

He is a headliner for all of the major UK clubs, the Laugh Factory tours of the middle east and the Punchline tours of China, Hong Kong and Japan.

On screen, his film credits include the romantic comedy Standby opposite Brian Gleeson and Mad Men’s Jessica Pare (2014), fantasy adventure Earthbound, in which he starred alongside Rafe Spall (2013), Dublin in Pieces (2012) and Satellites and Meteorites (2008) both for I – Wire Films. He played the role of Enda in Butchers for RTE while he also appeared as Grant Gilmore in Trivia (RTE). John wrote and starred in Meet Mike, Ireland’s first ever Internet mini-series. The show was nominated for various awards, including the Golden Spiders and the Digital Media awards and won an ICAD and three APMC Awards.

In theatre, John has appeared as Bush in Fishamble’s production of Rank, a play by Robert Massey as part of the Dublin Theatre Festival, which later transferred to the Tricycle Theatre in London. He also appeared in Lane Productions staging of Robert Massey’s Deadline.

His most television appearance was as Declan in RTE’s Bridget and Eamonn and he has just finished playing Teddy in the feature film The Randomer, a new romantic comedy by Gerry Stembridge.

John has signed to NBC Universal on a development deal to record his first stand up special. He is the first Irish act to be represented by the West End’s famous Comedy Store, described by the Guardian as “The National Theatre of Comedy” and as “The Greatest and most influential club on the planet” by Time Out.

He splits his year living between London and Los Angeles.

“Cracking comedy. Has a finger on the jittery pulse of our car crash age, well worth catching” DAILY TELEGRAPH