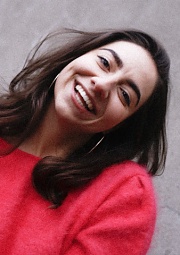 Hannah is a writer, actress and comedian based in Dublin. She has appeared on Ripper Street, Republic of Telly, Des Bishop’s This is Ireland and Nick Kelly’s first feature The Drummer and the Keeper. Most recently she starred in two Screen Ireland shorts, Maya directed by Sophia Tamburrini, co-starring Pat Shortt and A Better You directed by Eamonn Murphy which premiered at the Cork Film Festival.

Hannah has written two sitcoms for Dublin based Television Production Company Sideline which have been presented to both Sky Ireland and the BBC. Her first one-woman show The Egg is a Lonely Hunter which premiered at the Dublin Fringe Festival 2017, was subsequently nominated for three awards and asked to return for the First Fortnight Festival, after which it completed a successful five star run at the Edinburgh Fringe Festival 2018. Her most recent show Symphony of Worms premiered at the Dublin Fringe Festival 2019 where it was nominated for three awards, and won the Spirit of Wit Award. It is set to tour Ireland and abroad over the next 12 months. Aside from solo shows she has written extensively for theatre including projects for the Bram Stoker Festival and two iterations of the dark comedy anthology Personal Space for Smock Alley co-written with Stephen Colfer and Peter McGann.

Her work also includes stand up. She regularly writes and performs her own material and collaborates with groups such as Dreamgun and MOB Theatre. She guests regularly on the podcast Phoning It In and co-hosts her own comedy podcast Reviewables. She has performed at Body and Soul, the Vodafone Comedy Festival, and the Cat Laughs Comedy Festival including support for Phil Jupitus at Stendhal Festival.

“Hannah Mamalis is a born storyteller, to use a phrase that possibly does not do her capacity for creation or sensuous delivery justice.” ***** The Skinny

“Beyond the charm and utter ease of this performance is a revelation of vulnerability, a surprise emotional kick.” **** The Irish Times

“Reminiscent of the storytelling of Daniel Kitson” The Stage

“Her facial expressions are mesmerizing, her words are heightened both comedically and meaningfully as you watch her perform, and the voice she uses is simply captivating. She holds the audience in the palm of her hand.” Ed Fest Magazine

“A commanding presence and a beguiling, charming tone” Three Weeks