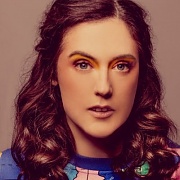 Gráinne Maguire is a stand up comedian and comedy writer. She has appeared on Comedy Centrals “Alternative Comedy Experience” Dave’s “UnSpun With Matt Forde” BBC1’s “Question Time” Channel Five’s “When The News Goes Wrong” and Radio 4’s “The Now Show” “More Money Than Sense” “An Idiot’s Guide” “Breaking The News” and Radio 2’s “What If?”

She was nominated for Best Show at the 2016 Leicester Comedy Festival and Best Show by Broadway World at the 2018 Edinburgh Fringe Festival.

She is also a regular writer for Channel 4’s The Last Leg and 8/10 Cats.

“Original and unpredictable – a delightful, incisive hour of truth and madness” – Fringe Guru