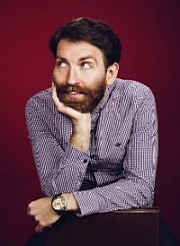 Best-selling and critically acclaimed broadcaster, author, comedian and recently RTE Comic Relief Quizmaster Colm O’Regan is raring to get back onto the stage after lockdown.

He is the author of six best-selling books including the Irish Mammy trilogy, Bolloxology and the two Ann Devine novels – the latest of which is the novel Ann Devine Handle with Care (‘A heart-warming Irish tale provides a much-needed lift in spirits’ Sunday Times ‘very funny’ Irish Times)

He hosts Ireland’s most successful storytelling night the Dublin Story Slam and is resident MC at Inn Jokes, one of Dublin’s longest established Comedy Clubs.

As a stand-up comedian, he has performed all over the world. His stand-up has also featured on RTÉ’s Late Late Show and on Comedy Central.

Colm writes a weekly column about ‘everything and anything’ for the Irish Examiner.