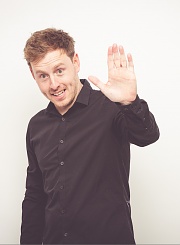 Andrew has moved back to Ireland after living in the UK for many years. A regular at all the top venues in the UK.
Andrew has appeared on many TV shows in the UK & Ireland He has performed stand-up on BBC3’s Russell Howard’s Good News, Best of the Edinburgh Festival Live on BBC3, The Blame Game on BBC 1, Live at The Comedy Store for Comedy Central, Live for MIND on Comedy Central, The Six O Clock show on TV3 ( Ireland). Contributions to Golf’s Funniest Moments, Crickets Funniest Moments, When Chat Shows Go Wrong all for Sky 1.

In Ireland Andrew performs regularly in Dublin and has been invited to perform at Kilkenny Cat laughs festival, Ivy Gardens in Dublin, Galway & Cork Comedy Festival. He has over 2.5 million online views across all platforms & Host of Cork in the North podcast.

www.andrewryancomedy.com for clips and more info

“An hour of hilarious comedy” ★★★★ Edfestmag