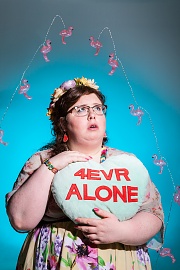 Alison Spittle is an award-winning writer and comedian who can regularly be heard on The Guilty Feminist and BBC Radio 4’s Grownup Land. She is the creator and star of the television series Nowhere Fast, which aired on RTÉ2 to great critical acclaim.

She is the co-creator and co-star of the BBC sounds podcast Wheel of Misfortune. Her chat show style podcast, The Alison Spittle Show amassed a huge following with guests such as Sharon Horgan, Adam Hills and Kevin McGahern. She performs at podcast festivals across Ireland and the UK.

Alison was a regular contributor to the RTÉ series Republic of Telly where she wrote and performed her own segment, A Guide to Mullingar. She was team captain on the panel show Choose or Lose for RTÉ 2 and also presented their coverage of Electric Picnic. She wrote and starred in Alison Spittle in Ireland, a short film produced by Baby Cow Productions for Sky Arts. She can currently be seen on screen in the film Extra Ordinary. She also featured in RTÉ’s Celebrity Globetrotters.