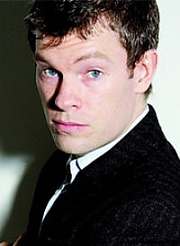 Native New Yorker Aidan Bishop began his comedy career in his hometown however since relocating to Dublin he has become one of the top comics working today. As organizer and resident MC of the now famous International Comedy Club, he has honed his craft in the same room as some of Ireland’s most famous comedians for over 10 years.

However his ambitions have not been confined to the small borders of the International. Aidan has appeared in all major Irish festivals, including the Kilkenny Cat Laughs and the Vodafone Comedy Carnival, Galway and the Vodafone Comedy Festival at the Iveagh Gardens in Dublin. In 2008 Aidan made his Edinburgh Fringe Festival Debut with his solo show, Bachelor Pad to critical acclaim. Following this, his show Misspelled, a show that was born out of his experience of dyslexia, enjoyed a sold out run in 2011. In 2013, he toured his show How you doin’. His television debut came with RTE 2’s Savage Eye as part of Project Ha Ha.

‘Aidan Bishop’s Fringe debut impresses with the New Yorker’s command of an audience.’ THE SCOTSMAN

‘A bright future ahead no doubt … a solid presence well worth catching.’ THE IRISH TIMES