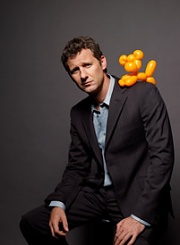 Adam Hills has achieved international acclaim as one of the world’s best stand up comics. Dubbed as the nicest guy in comedy, when he is not conquering the small screen, he is treading the boards as one of our finest stand-up comedians, selling out rooms around the world.

Already a star in Australia, Adam Hills has taken the UK by storm with his own talk show on Channel Four – The Last Leg which was originally a one-off series for the 2012 London Paralympics. Adam’s other television credits include Never Mind The Buzzcocks, Today With Des and Mel, The BBC Stand Up Show, The World Stands Up, and The World Comedy Tour which also screened in Australia, USA and Canada. Adam also hosted Spicks and Specks on ABC in Australia and received widespread acclaim for his back-stage interviews at the 2005 Logie Awards.

Adam’s solo shows have seen sell-out houses at the Adelaide Fringe, Melbourne Comedy Festival and the Kilkenny Cat Laughs Festival. He is a regular at the Montreal Just for Laughs Comedy Festival, and was the first Australian comedian to appear at the US Comedy Arts Festival in Aspen 2005, where he performed in Experts Only as well as hosting the Midnight Talk Show.

However it is at the Edinburgh Fringe Festival that Adam has truly made his mark. Adam enjoyed totally sold-out shows 2000 to 2004, three of which were nominated for the prestigious Perrier Award at the festival.

Adam is a writer has been a regular contributor to Subaru Magazine, Inside Cricket and Ouch! Website. He also has three best selling stand up DVDs under his belt including Happyism and Inflatable.

“Comedy so brilliant it could come with a money back guarantee. If you cannot enjoy Adam Hills you cannot have a pulse.” ***** THE SCOTSMAN