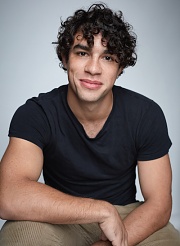 Youssef Quinn is an Irish/Algerian actor based in Dublin. Youssef is an extremely versatile and talented young actor with an array of polished accents who has a passion for film and theatre.He began performing at an early age which led him to study Drama and Film at Trinity College Dublin. During this time he performed in many DramaSoc theatre productions as well as making his on screen debut in RTE’s ‘Bernard Dunne’s Mythical Heroes’. In the following years he appeared in Daivd Lowery’s ‘The Green Knight’, RTE’s ‘Blast from the Past’ and most recently Apple TV’s ‘Foundation’ series as ‘Fyre’. As well as acting Youssef is an accomplished screenwriter, he wrote and starred in a mockumentary pilot series called ‘Fly Boyz’ which is currently in post-production.