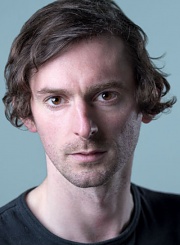 Tim’s one man show, Spliced was last seen at this year’s Edinburgh Fringe Festival, and on tour around Ireland. See dates here .

Tim trained at the Oxford School of Drama.

Tim will soon appear as Brendan BIK Macfarlane in the upcoming film Maze alongside Tom Vaughan Lawlor & Barry Ward. The film will premier at the Galway Film Festival and is due for general release in the UK & Ireland in September. Tim was a central character in season 2 of An Klondike which was nominated for 10 IFTA awards in 2017. Tim played the one of the leads alongside Seán McGinley & Don Whycherly in the TG4 production Fir Bolg about an Irish Celtic rock band revival.

Tim is currently writing and developing his first solo show. Working with a visual artist and an electronic musician it is a multi-disciplinary performance that explores the GAA for all its good and glory and for its faults and darker side. It will premier in 2017.