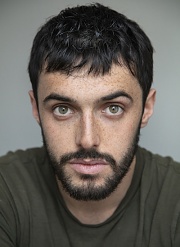 Peter Newington was last seen on stage in Cuckoo at London’s Soho Theatre. He can now be seen on screen in Calm with Horses, opposite Barry Keoghan.

Peter, aged 20, is currently studying English with Drama in UCD. He is set to play Hamlet in a UCD production in January.

Peter began acting when he joined Dublin Youth Theatre in 2013. He was cast as the lead role, Melchior, in DYT’s production of Frank Wedekind’s ‘Spring Awakening’, which played at the Axis Ballymun as part of the 2014 Dublin Theatre Festival. The following year, Peter performed in ‘Show Me Love’, a DYT play written by Colin Thornton, which played at Smock Alley in October 2015.

Since starting his studies in UCD, Peter has played Stanley Stubbers in Richard Bean’s ‘One Man, Two Guvnors’, Cornwall in ‘King Lear’, and performed in ‘Brief Interviews with Hideous Men’, a stage adaptation of David Foster Wallace’s short stories.