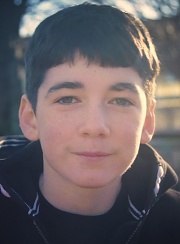 Moses Murphy is aged 14. From a young age he played a number of characters for DIG IN DINER, a series of TV comedy sketches on RTÉjr series. Further TV roles include RTÉ2’s young peoples series Elev8 and Republic of Telly and live stand up on THE TODAY SHOW.

Film includes leading roles in STEPPING UP, a short film by Peter Scota Productions and a Focus Ireland short AN ENCOUNTER based on a story from James Joyce’s The Dubliners, scripted by Mark O’Halloran.

Theatre includes GOODNIGHT DELIA at The Dolmen Theatre and a showcase performance of a new musical GO TELL IT ON THE MOUNTAIN.