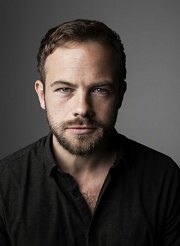 Moe will soon appear in the leading role in Knuckledust (written and directed by James Kermack) for Featuristic Films/AT Entertainment which is due for release in late 2020. He most recently appeared in the series regular role of Det Sam O’Neill in BBC One’s Dublin Murders opposite Sarah Greene, Killian Scott and Tom Vaughan-Lawlor. Moe has just wrapped filming on The Texas Chainsaw Massacre for Bad Hombre/Legendary Entertainment which is due for release in 2021. He is currently appearing in the short film Topping Out directed by Kerry Fox, in film festivals in the UK and USA.

Moe is from Dungarvan, Co Waterford and graduated from the Gaiety School of Acting Full Time Acting Course in June 2009. He was chosen as a Shooting Star for Ireland at the B*erlin International Film Festival 2015* and won the Breakthrough Artist Award at the Newport Film Festival 2019 at which he also won the Best Actor Award for The Dig.