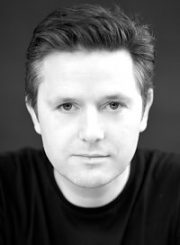 Luke was last seen on stage in Verdant Productions tour of Brothers of the Brush . He was most recently seen on screen in RTÉ’S Fair City .

Theatre includes Dublin will Show You How (Peacock Theatre), Moving by Hugh Leonard, Drama At Inish by Lennox Robinson, On The Outside by Tom Murphy and Made In China by Mark O’Rowe all at the Abbey. Borstal Boy by Brendan Behan , Juno And The Paycock by Sean O’Casey at the Gaiety. The Lieutenant Of Inishmore by Martin McDonagh in the Garrick London. DogShow:Shep and Dogshow: Fido by Garrett Keogh and Setanta Murphy Part One also by Garrett Keogh.
Television and films include two seasons of The Clinic, Pure Mule for RTE , Band Of Brothers for HBO, Speed Dating, The Disappearance of Finbar Samson Films, The Nephew for Irish Dreamtime, Borstal Boy for Hells Kitchen, The Alarms: A Story in Words and Dublin in Pieces for i-Wire Films.
Luke recently appears in The Mario Rosenstock Show on RTE2.