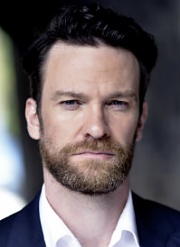 Keith was last seen on screen in BBC’s new film Ups and Downs – he will next appear opposite John Simm in Cold Courage.

Recent screen appearances include VIKINGS (MGM/HISTORY) in the recurring role of Lord Denewulf and THE TRIAL OF THE CENTURY opposite Tom Vaughan-Lawlor as James Connolly (TV3).

Keith is one of Ireland’s leading actors and appeared as Eamon in ARISTOCRATS and Lovborg in HEDDA GABLER both for The Abbey Theatre. He has previously appeared in many other Abbey productions including THE COLLEEN BAWN which toured to the National Theatre in London. Other recent stage appearances include Porcelain by Margaret Perry, directed by Cathal Cleary at the Peacock.

Film and TV includes: TRIVIA the award winning comedy drama series for RTE/Grand Pictures in which he co-starred earning him a Best Actor Nomination at the Monte Carlo Television Awards. He appeared in the leading role of Shane in all 5 series of the RTE drama RAW produced by Octagon Films for which he was also nominated Best Actor in a Drama by the Monte Carlo TV festival. Keith played the series regular role of Barry in John Carney’s award-winning TV comedy drama Bachelors Walk for all three seasons.

Most recent films include JUMP directed by Kieron J. Walsh and John Carney’s new film SING STREET which has just been accepted to the Sundance Film Festival.
Previous films include BLACKWATER LIGHTSHIP/ Hallmark Hall of Fame Prods., FLYBOYS/Lionsgate Films with Jean Reno, WHEN BRENDAN MET TRUDY, THE ESCAPIST and TOUCHED BY AN ANGEL/CBS.