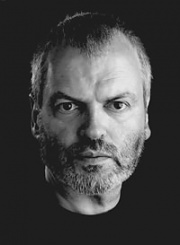 “His performance was absolutely marvellous! … He looked like Orson Welles and he sounded like Orson Welles” – Senator David Norris to Gay Byrne following the final episode of The Templewood Murder Mystery on The Late Late Show – April 22 1994

Jonathan is probably Ireland’s best-known Voiceover Artist. He has recorded thousands of TV, Cinema and Radio commercials – including many in German for broadcast in Austria, Germany and Switzerland – as well as narratives and documentaries – winning national and international awards for his work in this field.
Possessing a dramatic baritone voice, a remarkable talent for impersonation, accents and mimicry, he will reproduce any male voice type.

As an accomplished and versatile performer Jonathan’s career has encompassed an extraordinary range of projects in all areas of his profession for more than thirty years.

Providing 10 voices in The Jaundiced Eye, RTE’s award-winning entry for the Monte Carlo Radio Prize and playing Jesus in The Man Born to be King while with the RTE Players, during which time he also presented the children’s TV programme Bosco – operating and voicing the puppet for the pilot series – in his first two years in the business he appeared in six plays in Rep with the Lyric Theatre Belfast, played the title roles in Liam Liar and Toad of Toad Hall, at the Oscar Theatre, the male lead in both Gigi! and Sweet Charity at the Gaiety Theatre, The Gentleman Caller in MacLiammóir/Edwards’ production of The Glass Menagerie at the Gate Theatre, Benvolio in Romeo and Juliet at the City Theatre Hong Kong and Bill Sikes in Noel Pearson’s production of Oliver! at the Olympia Theatre.

He played Schooner Cooney in Bracken(RTE) and Randall McDonnell in The Year of the French (RTE /Ch4) and Doctor Jerome Hickey in Series 2 & 3 of The Irish RM (Ch4) – Bogart in Woody Allen’s Play It Again Sam! at the Eblana Theatre – and at least 20 characters – including Hitler, Karl Marx, J.R.Ewing, Idi Amin, Bob Dylan, Phil Lynott and Bogart – as well as a range of comic stereotypes in John McColgan’s RTE TV series Twink.

Played Joe Fell in I Do Not Like Thee Doctor Fell – and leading roles in Night and Day, The Silver Dollar Boys, Hamlet and The Death and Resurrection Of Mr Roche at the Abbey Theatre, and in Innocence, Peer Gynt and Salomé at the Gate Theatre, the latter touring to the Edinburgh Festival and the Spoleto Festival in the United States.

Made two memorable guest appearances on The Late Late Show performing speeches from Shakespeare incorporating multiple impersonations – played Mortimer Brewster in Arsenic and Old Lace with Siobhán McKenna and Maureen Potter at the Gaiety Theatre – the wizard Abanazar in Aladdin at the Olympia Theatre – James in Die Glückliche Familie on German TV – the lead in The Templewood Murder Mystery and appeared in Budawanny, Taffin, Patriot Games, In The Name of the Father and Kidnapped.

More recently he played Paul Sheldon in Stephen King’s Misery on a nationwide tour – Sinn Féin leader Gerry Adams in the TV film Omagh – three roles in Series 1-3 of the animated feature series Galactik Football – the French Ambassador in Series 1-3 of The Tudors – Greg Hartnett in The Clinic – Adolf Gebler in Roger Doyle’s Adolf Gebler Clarinettist with the RTE Symphony Orchestra at the National Concert Hall, the evil American Bill Taylor in Fair City, played Proinnsias De Rossa in Betrayal of Trust (The Brendan Smyth story) for the BBC, and roles in Chasing Leprechauns for Hallmark TV, Camelot(Starz) and in the feature film Grabbers and in HBO’s Game of Thrones – both due for release in 2012.

An accomplished singer, his music credits range from fronting a Rock n’ Roll band – playing lead roles in Gigi! and Sweet Charity at the Gaiety – Grease! at the Lyric Belfast – Oliver! at the Olympia – Archer in The Beaux Stratagem at the Abbey and presenting a singing Prionsias de Rossa in an RTE TV Panto, to performing The Durkan Suite with Bill Whelan and the London Chamber Orchestra at the National Concert Hall.

With considerable experience in animation and film dubbing – Jonathan voiced five characters in The Sign of the Fish with Ben Kingsley and Susannah York – worked with Jim Sheridan on the Oscar-winning My Left Foot and The Field and extensively with Aidan Hickey – for whom he provided all the voices in three animated series – Jimmy Murakami, Tim Booth and Michael Algar – with whom he has worked on three series of the internationally acclaimed Galactik Football.