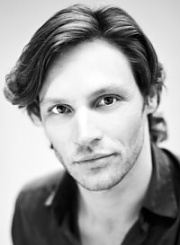 James is the frontman of award winning comedy rock band Dead Cat Bounce, which formed in 2008 and since then has toured relentlessly becoming one of the most exciting live comedy acts in the world. In 2013 he began performing solo with his first show Don’t Swim with Killer Whales premiering at the Sydney Comedy Festival.

James completed his undergraduate degree at Trinity College Dublin in 2005 and went on to do postgraduate work in Medieval History before he began a full time career as a writer and comedian.

He has appeared on TV shows in Ireland, the UK, Canada, Australia and New Zealand. The most notable was the “Rugby” video on Republic of Telly (RTE) which went on to become one of the most watched internet videos of 2011, a series of online shorts for BBC Comedy, and a number of huge comedy galas on BBC3, Channel 4.

Most recently James has finished working on “Discoverdale” (Welded Tandem Picture Company and 2Entertain) a feature film he co-wrote and stars in along with the other members of Dead Cat Bounce which has gone on to win a string of awards including Best of the Fest at the LA Comedy Festival and Best International Film at the Galway Film Fleadh. He is also in the process of writing a further feature for Blinder Films and the Irish Film Board.