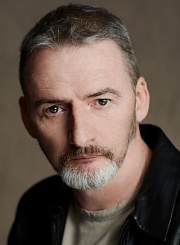 Frankie was last seen on screen in BBC One’s Death and Nightingales opposite Jamie Dornan – he will next appear in Pixie, due for release later this year. He was last seen on stage in Playboy of the Western World at the Lyric Theatre.

Recent film roles include Middeltown, Puckoon, Omagh, In the Name of the Father, Sweety Barrett, Fools of Fortune, Angela’s Ashes, Guiltrip, Sweeney Todd and The Birth of Frank Pop. He appeared in City of Embers (Universal) and in Fifty Dead Men Walking(Brightlight Pictures) , both released in 2008. Frankie appeared in Zonad written and directed by John Carney for Element Films, The Galway Races directed by Robert Quinn for Great Western Films/TG4 and on Wide Open Spaces written by Arthur Mathews and directed by Tom Hall for Grand Pictures. He recently appeared in The Runway, directed by Ian Power for Fastnet Films and in Standoff directed by Terry George for Generator Films.

Frankie appeared in The Crucible directed by Conall Morrisson as the first production in the newly re-opened Lyric Theatre in Belfast. He most recently appeared as Uncle Peter at The Plough And The Stars at The Abbey Theatre, Dublin and on national and international tour. He studied at University College Galway and the Conservatoire National Superieur d’Art Dramatique, Paris. He appeared in Much Ado about Nothing directed by Rachel O Riordan at the Lyric, Belfast. Frankie performed his one-man show Tintype at Kilkenny Arts Festival to five star reviews. Other theatre includes Mark Doherty’s Trad produced by Galway Arts Festival (Edinburgh Fringe First and Adelaide Fringe awards, transferred to Bush Theatre, London in 2007, and to Perth Festival, Australia in 2008), Endgame for Prime Cut Productions at the Waterfront Studio, the world premiere of Daragh Carville’s Family Plot for Tinderbox Theatre Company and Conal Creedon’s Second City Trilogy at the Half Moon Theatre, Cork, Conversations on a Homecoming and Observe the Sons of Ulster Marching towards the Somme (Irish Times Best Supporting Actor award) at the Lyric, and many productions for Druid Theatre Company, Galway, including Sharon’s Grave, and At the Black Pig’s Dyke, and A Midsummer Night’s Dream for Barabbas.