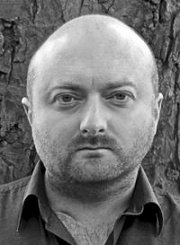 David was most recently seen on the Abbey stage in the remount of Dermot Bolger’s adaptation of James Joyce’s Ulysses. He will next be seen on screen in Boys from County Hell, due for release later this year.

Biography – David studied drama at the Samuel Beckett Centre, Trinity College Dublin. On screen his recent appearances include Bad Day for The Cut (Six Mile Hill) and the soon to be released The Foreigner with Pierce Brosnan and Jackie Chan (STX). Other recent screen work includes Musketeers (BBC), Moonboy (Babycow/Sky), Pursuit (An Pointe Productions, Paul Mercier), Grabbers (Forward Films), The Guard (Element Pictures), The Runway, directed by Ian Power for Fastnet Films, both seasons as Lawrence in Trivia, a comedy drama written by Damien Owens and directed by Tom Hall for Grand Pictures and RTE for which he was nominated in the Best Actor category at the Monte Carlo Television Festival 2011. David also appeared in Titanic: Blood and Steel directed by Ciaran Donnelly for the D’Angelis Group (DAP) and in Keith Lemon The Movie, he also appeared in the recurring role of Svein in Season One of Vikings (History/MGM) opposite Gabriel Byrne. David appeared in the co-leading role of Bonad in John Carney’s feature film Zonad for Element Films released in Ireland in 2010, in Kiri Skogland’s feature film 50 Dead Men Walking and appeared as Malcolm in Element Films production of No Laughing Matter written by Stuart Carolan and Barry Murphy for RTE which was nominated for an IFTA for Best Television Drama in 2009. Other screen work includes Running to Stand Still, Six Shooter (which won the Oscar for Best Live Action Short in 2006), Laws of Attraction, The Account, Bachelor’s Walk, Stew, Spin the Bottle, Rebel Heart (BBC), An Everlasting Piece (Dreamworks) and Bloody Sunday (BBC).

On stage David appeared as JohnnyPateenMike in Martin McDonagh’s The Cripple of Inishmaan directed by Garry Hynes for Druid Theatre Company at the Atlantic Theater, New York for which he was awarded the Outer Critics Circle Award for Outstanding Featured Actor (2009) and for which he was been nominated for a Drama League of America Distinguished Performance Award in 2009. He most recently appeared on stage as Leopold Bloom in the Abbey Theatre’s hugely successful production of James Joyces’s Ulysses adapted by Dermot Bolger and directed by Graham McLaren for Dublin Theatre Festival 2017.

For the Abbey and Peacock Theatres his appearances include The Hunt For Red Willie, At Swim Two Birds, Lolita , Henry IV (Part One) and Observe the Sons of Ulster Marching Towards the Somme for the Dublin Theatre Festival 2004. Other theatre work includes; Midsummer Nights Dream (Barabbas), Playboy of the Western World (Druid Theatre Company), Mud (Corn Exchange) Eccentricities of a Nightingale (Gate), The Misanthrope (Gate), Hamlet (Second Age), Fileach an Fin and A Midsummers Night Dream (Iomha Ildanach), Julius Caesar, The Revenger’s Tragedy, Measure For Measure, The Spanish Tragedy, Coriolanus and The White Devil (Loose Canon Theatre Company), Five, Carshow, The Seagull (The Corn Exchange), Borrowed Robes, Carolan’s Farewell, Pigtown (Island Theatre Company), Alone It Stands (Yew Theatre Company), Conversation With a Cupboard Man (Semper Fi) and Diarmuid and Grainne and Studs (Passion Machine) and Jack and the Beanstalk (Gaiety). David was nominated for Best Supporting Actor in the 2000 Irish Times/ESB Theatre Awards for his performance in The Hunt For Red Willie (Peacock) and was awarded Best Actor in the 2001 Fringe Festival for his performance in Scenes From A Watercooler (Guna Nua Theatre Company). David appeared as Little Monk in Galileo for Rough Magic Theatre Company, in Trad for the Galway Arts Festival which transferred to the Dublin Theatre Festival and Edinburgh International Festival and as Harvey Duff in The Shaughran at the Albery Theatre, London. David re-appeared in Trad at the Adelaide Festival, Australia and at the Bush Theatre, London. David appeared in The Importance of Being Earnest at the Abbey Theatre and as Sir Benjamin Backbite in The School for Scandal, directed by Jimmy Fay. David appeared in Calypso Theatre Company’s production Talking To Terrorists and in the title role of Corcadorca’s production of Woyzeck in Cork for the Midsummer’s Festival 2007 and more recently as Tony Lumpkin in the Abbey Theatre’s production of She Stoops to Conquer directed by Conall Morrisson and in _Midsummer Nights Dream_directed by Gavin Quinn also at the Abbey Theatre, Dublin.