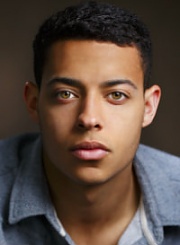 Daryl was last seen on stage in Dylan Coburn Gray’s brand new production Citysong in the Galway Arts Festival. Daryl can now be seen on screen in Peaky Blinders opposite Cillian Murphy. He is currently shooting on Wheel of Time for Amazon Studios.

Daryl graduated from DIT Conservatory of Music and Drama with a B.A in Drama Performance in 2014.

His first television appearance came when he appeared on the Referendum Commission Campaign adverts in October 2013 and more recently a major campaign for Mace supermarkets.

Daryl recently appeared on stage on the west end in The Lieutenant of Inishmore opposite Aidan Turner.

Daryl’s debut in theatre was in the DIT Conservatory production of Macbeth where he played Lennox. The following year he played Romeo in Romeo & Juliet. Other theatre credits include A Fair Ball T’yis in Samuel Beckett Theatre for the Fringe Festival 2013 and The Grapes of Wrath in the Project Arts Centre.