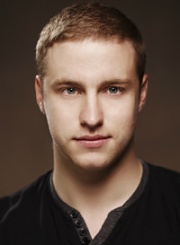 Conor Quinlan graduated from the Gaiety School of Acting, Class of 2015. Conor recently appeared in Jack Taylor: In Purgatory as the role of Ivan directed by Charlie McCarthy.
Conor appears as the role of P.J. in the feature film Jadotville (Parallel Films) opposite Jamie Dornan. Conor most recently appeared in the hugely successful run of The Boys at Smock Alley Theatre, Dublin.