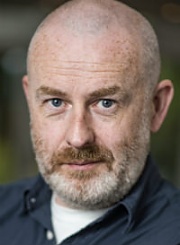 Colin was born in Downpatrick Northern Ireland. After attending art school in Bristol then Belfast, he worked as an illustrator. His first experience on stage was taking part in and winning the improv award at the Irish Student Drama Awards. As a result of this he was cast in Sightlines Theatre Company’s production of Road by Jim Cartwright at the OMAC in Belfast. He performed with Sightlines Theatre Company for several years, touring productions throughout Ireland and playing the Edinburgh Fringe with “Dogman!” an adaptation of Mikhail Bulgakov’s Heart of a Dog. Alongside his acting Colin was developing a successful career as a stand-up comedian and this led to acting roles in comedies such as the BAFTA nominated People Like Us for the BBC. He has appeared in the feature film Divorcing Jack and the award winning drama feature Holy Cross for the BBC. He fronted a hugely successful series of commercials for Harp Lager and has narrated a number of documentaries for the BBC, RTE and TG4. For the last few years Colin has concentrated television work and stand-up but more recently he has returned to acting in Fit To Burst, a radio play for BBC Radio 3, and to theatre by co-writing two very successful Christmas shows for the Lyric Theatre in Belfast with playwright Gary Mitchell.