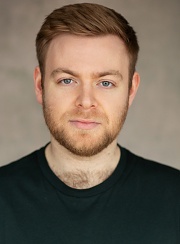 Caolan was last seen on stage in the West End run of Amelie the Musical .

Upon graduating from the 3-year BA Acting course at RADA in 2015, following a move to London from his native Tyrone, Caolan spent 5 months on the BBC Radio Drama Company after winning the prestigious Carleton Hobbs Award. His professional stage debut came the following year in the National Theatre’s production of The Plough and The Stars directed by Howard Davies and Jeremy Herrin. Caolan is a mutli-instrumentalist with experience in composition and arrangement, teaching, recording, and direction. He is a dialect and accent enthusiast and regularly makes use of these skills with his continued relationship with BBC Radio.

His other theatre credits include the titular role in Storyhouse, Chester’s inaugural production of The Beggar’s Opera (dir. Alex Clifton), Friar Francis/Conrad in Much Ado About Nothing at the Rose Theatre (dir. Simon Dormandy), and Eamon in the UK’s first regional tour of Once at The New Wolsey Theatre, Ipswich/ The Queen’s Theatre (dir. Peter Rowe).

Last year, Caolan completed a West End run of Amelie The Musical playing Hipolito and Elton John, following a UK and Ireland tour (dir. Michael Fentiman). This lead to recording the Original London Cast album for which he earned a 2021 Grammy nomination as a principle soloist for “Best Musical Theater Album”.