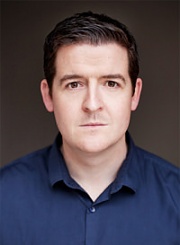 Aonghus will next be seen on screen in Mo Ghrá Buan, a new Irish feature film.

Aonghus is a graduate of the Samuel Beckett Centre, Trinity College Dublin and also trained with Anne Bogart’s SITI Company in New York. His appearances at the Abbey Theatre include Big Love, The Burial at Thebes, Romeo & Juliet and The Plough and the Stars, which also toured to The Barbican, London as part of The Abbey’s centenary celebrations. Elsewhere, Aonghus has appeared in The Nose (Performance Corporation), W. B. Yeats’ CúChulainn Cycle (R.H.A. Downstairs, Dublin and Riverside Studios, London), Myrmidons (Ouroboros), The Tempest (Corcadorca), Macbeth, Hamlet and Romeo and Juliet (All for Second Age), One– Healing with Theatre (Pan Pan), An Triail (Aisling Ghéar), Buile an Phíce (Amharclann de hÍde), A Midsummer Night’s Dream and Not a Moment to Lose (Torn Curtain). Recent theatre includes Serious Money (Seeds Project for Rough Magic directed by Aoife Spillane Hinks), and The Nose directed by Jo Mangan for Performance Corporation. He most recently appeared in his hugely successful one man show Fight Night which he co-created with writer Gavin Kostick as part of the Fishamble/Dublin Theatre Festival “Show in a Bag” initiative and which went on to tour across Ireland and to win a nomination for Best New Play at the Irish Times Theatre Awards 2012.