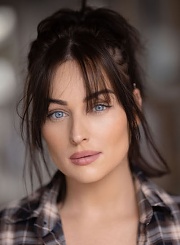 Tania Notaro is an actor and screenwriter from Dublin. She has appeared in TV shows such as AMC’s Into The Badlands, CBS’ Evidence of Evil and feature films such as Mark O’Connor’s Cardboard Gangsters, along with a plethora of award-winning short films. She is a graduate of Bow Street Actors Academy, The Gaiety School of Acting and Momentum Studios where she studied Meisner. She was recently nominated for Best Actress at the 12th Underground Cinema Awards for her performance in Mark Dollard’s Hunger. As an actress, she became incredibly disappointed with the lack of diverse roles for working-class women so she wanted to create her own. She has a 1st class Master’s degree in Screenwriting for Film & TV from The National film school, IADT, and Warner Brothers offered her a scholarship to do so. Last year she was inaugurated into the Warner Brothers Creative Talent team as an exceptional artist and one-to-watch. Her first script Boxed won her the John Boorman Scholarship at Irish Film School and she got to direct with Boorman himself. She is the winner of The Ronan Phelan Writers Award at IndieCork, 2019. Her feature screenplay Elephant earned her one of 10 places on the Nostos Screenwriting retreat in Italy and it also earned her a place on the X-Pollinator Elevator programme. She is the recipient of the Dublin Artist Award 2021 from the Dublin Arts Council and the recipient of the Artist Resilience Award 2021 from South County Dublin Arts Council.