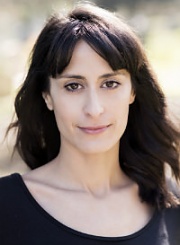 Shereen has performed in productions ranging from MEASURE FOR MEASURE and TITUS ANDRONICUS at the RSC to THE BLACK ALBUM and THE HOUR WE NOTHING OF EACH OTHER at the National Theatre. Most recently, she performed as the title role in THE ONLY TRUE HISTORY OF LIZZIE FINN, directed by the award-winning Blanche McIntyre. Other theatre credits include; THE BACCHAE (Abbey Theatre), THE BOMB (Tricycle Theatre), MODEL FOR MANKIND (Cock Tavern Theatre) and Viola in TWELFTH NIGHT (Albery Theatre).

Shereen is best known for her role in the BAFTA award-winning drama, BRITZ, directed by Peter Kosminsky.