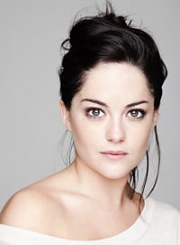 Sarah most recently appeared as Lorraine in Normal People the phenomenally successful adaptation of Sally Rooney’s novel, directed by Lenny Abrahamson and produced by Element Film for the BBC which has been nominated for numerous international awards. Previously she appeared as series lead Cassie Maddox in Dublin Murders, produced by Element Films for BBC One and RTÉ.

Sarah is originally from Cork and trained in Dublin where she graduated from the Gaiety School of Acting in 2006. She was awarded the 2015 IFTA and Irish Film Board ‘Rising Star Award” as well as winning the Best Supporting Actress IFTA for 2015 for her role in the feature film NOBLE – one of very few people to ever win two IFTA’s in one night! She adds these awards to her TONY Award nomination and Olivier Award nomination in 2013 and 2014 for her role as ‘Slippy Helen’ in MIchael Grandage’s production of Martin McDonagh’s The Cripple of Inishmaan with Daniel Radcliffe in the West End and on Broadway. Since then she has won the Best Supporting Actress IFTA for her role in Penny Dreadful (Showtime) opposite Helen McCrory, Eva Green, Timothy Dalton and Josh Hartnett, and returned to the West End in to star in Jez Butterworth’s award winning The Ferryman. She also starred in Woyzeck at the Old Vic opposite John Boyega.

Sarah appeared in 21 episodes of RANSOM (CBS) as series co-lead Maxine Carlson with Luke Roberts and Nazneen Contractor, created by Frank Spotonitz and David Valola.
Other film and television appearances include Roddy Doyle’s award winning feature in which she played the title role, Rosie, Dave Tynan’s Dublin Old School, BLACK 47, directed by Lance Daly for Fastnet Films, REBELLION for RTE, “BURNT” opposite Bradley Cooper and appeared as Laura in the TV mini series “THE ASSETS” (ABC).

Other film and television includes:
RAW RTE/Ecosse Films, EDEN/Samson Films, SPEED DATING/RTE, BACHELOR’S WALK/Samson Films/RTE. She played the leading role of Cathleen in the Canadian/Irish feature LOVE AND SAVAGERY directed by John N. Smith. MY BROTHERS (Treasure Films) and THE GUARD (Element) opposite Brendan Gleeson. She appeared as Judith in three episodes of VIKINGS (History Channel/MGM) and in the feature “STANDBY”.

Sarah appeared as Helen McCormick (Slippy Helen) opposite Daniel Radcliffe as Billy Claven in Martin McDonaghs’s The Cripple of Inishmaan, directed by Michael Grandage at the Cort Theatre on Broadway, NYC. Sarah was nominated for a TONY award (Best Actress in a Featured Role) 2014 for her performance in this show, one for which she was already nominated for an Olivier Award in 2013 during it’s West End run and for which she was awarded the 2014 World Theater Award for Outstanding Broadway Debut.

Other theatre includes Rough Magic’s production of PEER GYNT for Dublin Theatre Festival 2011 her acclaimed performance as Alice in thisispopbaby’s and the Abbey Theatre’s hugely successful production ALICE IN FUNDERLAND in 2012. She also appeared in ELLEMENOPE JONES both directed by Wayne Jordan at The Project Arts Centre, Dublin in 2011. Sarah appeared as Sorcha in Paul Howard’s play BETWEEN FOXROCK AND A HARD PLACE at the Gaiety Theatre, Dublin and Cork Opera House. She played Ismene in Rough Magic’s production of PHAEDRA by Hilary Fannin, directed by Lynne Parker as part of the Dublin Theatre Festival. Sarah appeared as Amber in Guna Nua’s award winning and highly acclaimed production of LITTLE GEM which won the Carol Tambor Best of Edinburgh Award at the Edinburgh Fringe Festival and led to a remounting of the production in New York as well as tours across the UK and Ireland. Other previous productions have included: Danti Dan for Galloglass, The Death of Harry Leon for Ouroboros, The Year of the Hiker and The Playboy of The Western World, The Empress of India, and most recently Big Maggie, all with Druid Theatre Company and directed by Garry Hynes.

Sarah is represented in the UK by Dallas Smith at United Agents.