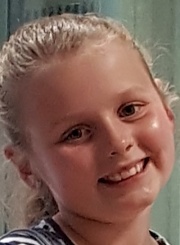 Ruby Rose is an extremely talented, bubbly and down to earth eleven year old from Dublin.

Film/TV: Ruby Rose has recently appeared in the (2019) movie Herself directed by Phyllida Lloyd in which she played a pivotal role as EMMA. Herself has received critical acclaim after its launch at the Sundance film Festival Ruby Rose also appeared in the award winning short film The Seceret Market (2017).

Theatre: Ruby Rose has appeared on stage in numerous productions,
Once the Musical at the Olympia Theatre (2016/2017), Ballyturk at the Abbey Theatre (2017) Girlsong at the Samuel Beckett Theatre during the Dublin Theatre festival (2018).

Ruby Rose loves being a big sister to her younger brother and loves reading, dancing, watching movies and hanging out with her friends.