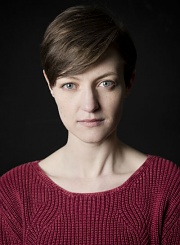 Rachel was recently nominated for an Irish Times Theatre Award for her performance in Stupid Things. She was last seen on stage in the Gate’s production of A Christmas Carol .

Rachel was most recently seen in the National Tour of Fishamble’s production of The Alternative . Other recent appearances include The Great Gatsby directed by Alexander Wright, Hugh Travers’ These Stupid Things at Smock Alley, Rise Production’s At The Ford, The Constant Wife directed by Alan Stanford at the Gate Theatre, Dublin and as a leading role in The Remains of Maisie Duggan by Carmel Winters, directed by Ellen McDougall at the Abbey Theatre, Peacock stage for the Dublin Theatre Festival 2016.

Rachel can be seen opposite Rachel Griffiths and Michael McElhatton in Mammal, a new feature film directed by Rebecca Daly.

From Dublin, Rachel was in the first graduating class of the three year Bachelor in Acting program at The Lir Academy (2014). Since graduating she has appeared in Druid Theatre Company’s acclaimed production of Tom Murphy’s new play Brigit alongside it’s acclaimed production of Bailegangaire at the Olympia Theatre for the Dublin Theatre Festival 2014 and on tour. Rachel performed in Othello as Desdemona at the Theatre Royal directed by Mark Lambert and 10,000 Miles Away directed by Conor Hanratty at Juilliard, NYC for St. Patrick’s Day 2015. She has also appeared in By the Bog of Cats at the Abbey Theatre.

While at the Lir, Rachel’s credits included Scenes from the Big Picture by Owen McCafferty, directed by Nona Sheppard, Elizabeth in Schiller’s Mary Stuart directed by Conall Morrison, Judith in The Night Season directed by Rachel West, The Baker’s Wife in Stephen Sondheim’s Into the Woods directed by Tom Creed, and Madeleine in The Clearing directed by Annabelle Comyn. She also appeared in the short film Kaleidoscope, which was developed by Lir students and directed by Rob Burke.

Before attending the Lir, Rachel completed a BA in Drama and Theatre Studies with French at Trinity College Dublin.

At The Ford (Rise Productions)