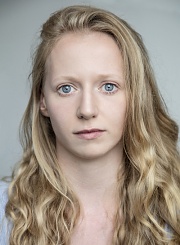 Molly graduated from TU Dublin’s Conservatoire of Music and Drama with a B.A honours degree in Drama (Performance) in 2020.

Before her training, Molly was cast in National Youth Theatre in 2017, performing as Busman in Rossum’s Universal Robots dir. by Catriona McLaughlin.

Molly Mew’s theatre credits include:
Busman in Rossum’s Universal Robots at the Peacock Theatre dir. by Catríona McLaughlin.
Lady Capulet in Romeo and Juliet at the Conservatoire dir. by Miriam O’Meara.
The Queen in Thousandfurs, the Wolf in Little Red Riding Hood and the Singing Bird in the Juniper Tree as a part of Grimm Tales at Smock Alley, dir. by Michael McCabe.
Molo in the devised piece the Family Table at the Conservatoire dir. by Pete McDermott.
Róisín in comedy-musical Dragon by Fizz and Chips Theatre Company at Scene & Heard and Body & Soul festivals respectively dir. by Martha Fitzgerald.
Squealer in Animal Farm at Roscommon Arts Centre dir. by Catherine Sheridan.
Bridie in If I Was in the GPO We Would Have Won at the Samuel Beckett Centre dir. by Catherine Sheridan.

Molly is originally from Co. Roscommon and has completed Grade 6 RIAM piano exam.