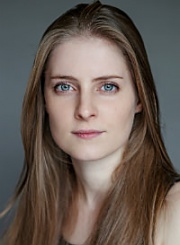 Mary-Lou was last seen on screen in RTÉ’s Fair City.

Mary-Lou played the reoccurring role of Úna in An Klondike series 1 and 2, nominated for 10 IFTA awards in 2017. Series 1 of the multi-award winning T.V. drama is now available on Netflix and Acorn under it’s international title Dominion Creek.

Mary-Lou is also experienced in dance and physical theatre and performed in Bodies in Urban Spaces (Cie. Willi Dorner) as part of The Dublin Dance Festival. The Blue Boy premiered at the Dublin Theatre Festival and subsequently Mary-Lou toured with the show for over 2 years to dance and theatre festivals throughout Europe and in Russia with the production winning the Grand Prix Award at Festival Kontakt, Poland.

Mary-Lou has a first class honors in Drama and Theatre Studies and English, she also writes and produces her own work. In 2019 she will be Artist in Residence at Le Centre Culturel Irlandais, Paris writing a new show for young audiences. As a writer Mary-Lou is a regular contributor to RTE Radio One’s Liveline programme, where she writes and performs comedy sketches for the live radio show Funny Friday