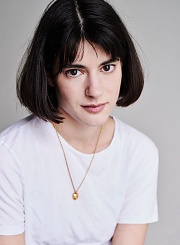 Maria can now be seen on screen in the brand new TV series Miss Scarlet and the Duke, on Alibi. She will next appear in Vikings for MGM/The History Channel.

Maria Guiver is an English actress, holding both American and British citizenship. She is a graduate of The Lir Academy at Trinity College Dublin and is now based between Dublin and London. Most recently Maria appeared as Una in Blackbird by David Harrower at The Theatre Royal Waterford, directed by Ben Barnes. The production returns for a National Tour of Ireland in 2019. Other credits since graduating include Louise in After the End by Dennis Kelly at The Lyric Belfast and The New Theatre: Dublin, Willie and Woman in Talk to Me Like the Rain: A Double Bill of Tennessee Williams at Bewley’s Café Theatre and various roles in the Irish Times Theatre Award nominated Glowworm at Project Arts Centre. TV credits include Vikings for the The History Channel.

Roles at The Lir include Lady Brute in The Provoked Wife, directed by Lynne Parker, Cassandra in Agamemnon, directed by Wayne Jordan, Trassie Conlee in Sharon’s Grave, directed by Conall Morrison, Natalia Landauer in I am a Camera, directed by Hilary Wood and Yelena in Uncle Vanya, directed by David Horan.

Prior to the Lir, Maria studied at The Royal Academy of Dramatic Art in London.