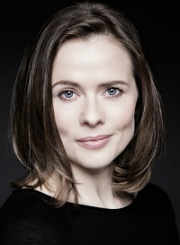 Born in Wicklow, Marcella Plunkett has worked extensively in theatre, television and film in the UK and Ireland.

Marcella’s film credits include: ZONAD, ONCE, ON THE EDGE, CINDERELLA, COUNTRY, FALLING FOR A DANCER and A KIND OF HUSH. Marcella appeared in a leading role in SWANSONG: STORY OF OCCI BYRNE an Independent Irish Feature Film directed by Conor McDermottroe. On television Marcella is perhaps best known as Alison on all three seasons of the hit show BACHELORS WALK (RTE). She also appeared in the role of Maura, a leading role in SINGLE HANDED III – THE DROWNING MAN directed by Antony Byrne for Touchpaper TV/RTE/ITV and in the series regular role of Ellen on season three of RAW for Ecosse TV and RTE.