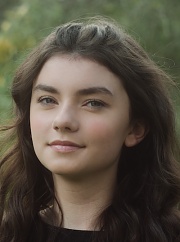 Lucy O’Connell is an thirteen year old from Kilkenny. She has a sweet and clear speaking voice which is region neutral. Lucy has perfect pitch and sings confidently with an untrained voice. Lucy loves acting and studies with her local acting group “Jesters” in Kilkenny. Lucy voiced the character of Saoirse in Cartoon Saloon’s Oscar nominated The Song of the Sea when she was just six years old. She was the voice of the character Angela in Brown Bag’s Angela’s Christmas and the sequel Angela’s Christmas Wish. She appeared as the child voice of Emily in IFTA winning and Oscar nominated animated short film Late Afternoon. She is the voice of Hugo in Disney’s Space Chickens in Space and Binah Badger in RTE’s Critter’s T.V. Lucy has also done some stage acting and played the part of Tam in Miss Saigon in the Watergate Theatre in Kilkenny.