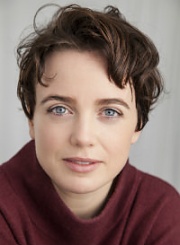 Lorna can now be seen on screen in I, Dolours which premiered at this years Galway Film Fleadh.

Lorna recently appeared as the leading role of Sarah in the Filmbase feature film The Light of Day. Lorna appeared in the RTE comedy TV series, as Stylist Karen, in the Damo and Ivor. Lorna appeared as the lead role of Janice in the independent feature film North Circular Road.
A native of Galway, Lorna is a graduate of the Gaiety School of Acting Full Time Acting Diploma (2010) and has since appeared as Antipholous in Comedy of Errors directed by Kristian Marken at Smock Alley Theatre, Dublin and as Aoife in Casa Lisa directed by Liam Halligan at the Project Arts Centre, Dublin.