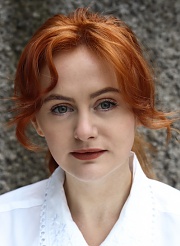 Kate was last seen on stage in The Gate’s production of A Christmas Carol .

Kate is also a writer and her one woman show The Wickedness of Oz was a Show in a Bag at Tiger Dublin Fringe in 2016. It won the Writers’ Guild ZeBBie Award it’s Radio verision on RTE Radio One. She also wrote and performed in A Picture of Us: A (sort of) Musical at Theatre Upstairs and Homebirds (Scene and Heard Festival @ Smock Alley)