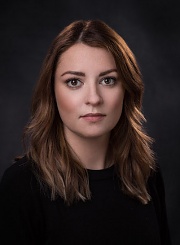 Karen has been acting since 2013, often producing her own work and performing comedy.

Karen’s first television job was on the IFTA nominated Irish Pictorial Weekly. She has produced and performed in multiple shorts including “Ascending Grace”, “Would You Like Some Toast?”, “Tuesday Night”.

Karen has a background in performing and writing comedy.

Most recently, she was awarded funding by the Incubator scheme, to write a feature film treatment with writing partner Claire Byrne. They have since been commissioned by Blinder Films and are in script development with their feature film, “Daughterhood”.

Last year she was the Irish recipient of “Bumble’s Female Film Force” funding. She wrote and performed in the short comedy, “Ascending Grace”, opposite Norma Sheahan which premiered as part of the Galway Film Fleadh 2020 and is continuing a successful, global festival run.